By: facenition.blog
In: Computer Vision
Spread the love

Last week we took a peek at how face recognition from images works. We noted that when you recognize a face, it is because your brain recognizes patterns such as how far apart the eyebrows are, how far the eyes are apart, how far the corners of the mouth is from the ears, etc. Your brain remembers how those parts come together to form the complete face. Upon looking at a face, your brain quickly analyzes those features and the distance between them and instantly compares that face to hundreds of others that you have stored in your memory.

These features could be from someone you are looking at in person, or from a photograph of someone. Once your brain finds a match, it gives you the name of that person, along with a wealth of information, such as “high school math teacher,” or “mother-in-law,” or “president of the United States,” or even “guy I saw on the running track last week.” All of this happens in seconds. While the process varies between different technologies, this is basically how face recognition technology works. 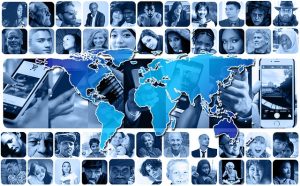 The steps of face recognition from images:

All of this happens very quickly. Just as the human brain analyzes all of this data to find a match within seconds, so does the face recognition software. Often, a person’s identification has been established before the person even knows that their photo has been taken. That’s how face recognition from images works.